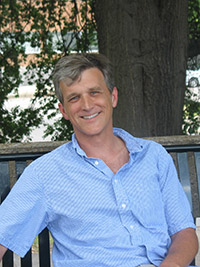 Michael Knight is the author of three novels (Divining Rod, The Typist and At Briarwood School for Girls), three collections of short stories (Dogfight and Other Stories, Goodnight, Nobody and Eveningland) and a book of novellas (The Holiday Season). The Typist (2010), was listed as a Best Book of the Year by several publications, including The Huffington Post and Kansas City Star, and included on Oprah’s Summer Reading List. Eveningland (2017) was selected as an Editor's Choice Pick by The New York Times and as a Southern Book of the Year by Southern Living Magazine. His fiction has appeared in magazines and journals like Esquire, Narrative, The New Yorker, Oxford American, Paris Review, Ploughshares, The Southern Review, Sewanee Review and Virginia Quarterly Review and has been anthologized in Best American Mystery Stories and New Stories from the South. He is the recipient of a Special Citation from the PEN/Hemingway Foundation (1999), the Robert Penn Warren Award for Fiction (2013) and the Truman Capote Prize (2018). He teaches creative writing at the University of Tennessee.